Shining from a Different Firmament 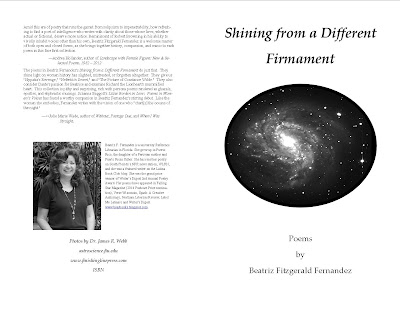 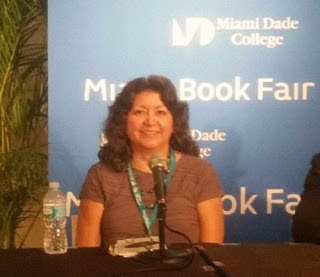 Chapbook review by Lucy Johnson, Editor of The Quarterday Review.

Blurbs on back cover by poet and Pushcart Award-winning poet Andrea Hollander:

Amid this era of poetry that runs the gamut from solipsism to impenetrability, how refreshing to find a poet of intelligence who writes with clarity about those whose lives, whether actual or fictional, deserve more notice. Reminiscent of Robert Browning in his ability to vividly inhabit voices other than his own, Beatriz Fitzgerald Fernandez is a welcome master of both open and closed forms, as she brings together history, compassion, and music to each poem in this fine first collection.
—Andrea Hollander, author of Landscape with Female Figure: New & Selected Poems, 1982 – 2012

The poems in Beatriz Fernandez's Shining from a Different Firmament do just that.  They shine light on women history has slighted, mistreated, or forgotten altogether.  They give us "Hypatia's Revenge," "Nefertiti's Secret," and "The Picture of Constance Wilde."  They also consider Dante's passion for Beatrice and examine Richard the Lionheart's mummified heart.  This collection is pithy and surprising, rich with persona poems rendered as ghazals, epistles, and ekphrastic musings. Julianna Baggott's Lizzie Borden in Love:  Poems in Women’s Voices has found a worthy companion in Beatriz Fernandez's stirring debut.  Like the women she embodies, Fernandez writes with the vision of one who "chart[s] the oceans of the night."
--Julie Marie Wade, author of Without, Postage Due, and When I Was Straight. www.juliemariewade.net

At my brother's suggestion, I am adding some supplemental notes to the poems in the chapbook:

Notes on Shining from a Different Firmament by Beatriz Fitzgerald Fernandez

Hypatia was a famous mathematician-astronomer and teacher in ancient Alexandria—some credit her with discovering the heliocentric model of the solar system about the same time as Copernicus but that is not certain.  She was legendary for her beauty and intelligence.  She became a martyr to the teaching of science when a group of religious zealots took exception to her ideas and decided to kill her.  They did all the things described in the poem and scattered her ashes outside the city.

This poem is a ghazal, which is an ancient Persian form of poem where there is a repeating word used as a refrain at the end of each couplet and the last couplet should refer to the author’s name somehow. Since I wrote this in Hypatia’s voice and her name means “supreme”—I used that word in the final couplet.

This poem was inspired by the novel Doc by Mary Doria Russell, which is a fictionalized version of the famous Doc Holliday’s life.  This poem is written as a letter (epistolary form) from his cousin, who he was rumored to have been ready to marry when he was diagnosed with tuberculosis, which also killed his mother at a young age.  With this death sentence hanging over his head, he supposedly decided not to  marry his cousin out of consideration for her,  and decided to move to a dryer climate for his health.  He continued to write her fond letters for the rest of his short life.\

Instead of leading a temperate life in the west, and practicing his profession (he was trained as a dentist and came from an aristocratic family) with his uncle, he became a gambler, a drunk (the whiskey helped the pain) and got in trouble with the law, mostly fights over card games, until he met Wyatt Earp and became his friend on the right side of the law (such as it was out west at that time.)

Doc Holliday was reputed to be a crack shot (he had learned that back in Georgia) and somewhat trigger happy. When he died, he was buried out West, but he had instructed that his personal effects go to his cousin, who had since entered a convent and become Sister Mary Melanie.  She was beloved by all her family and was the great-aunt of Margaret Mitchell, who wrote Gone With The Wind and patterned the character of the saintly Melanie Wilkes after her.

Nefertiti is rumored to have taken the identity of a nephew of hers and continued to reign in his name disguised as a man.  No one knows for sure, because her body was never discovered after her death.
This poem is what they call a Petrarchan sonnet, a poem of 14 lines where the rhyme scheme runs
abab, cdcd, efefgg

The Picture of Constance Wilde

Constance was the wife of Oscar Wilde. After the initial shock of his being accused of homosexual activities and thrown in jail to do hard labor, (which ruined his health and led to his eventual death,) she supported him financially, and visited him in jail.  Eventually she had to move to Paris and change her name due to the scandal, but she never repudiated him completely, while most of his friends abandoned him.  She felt sorry for him but her life was ruined along with his.  She had been a very bright woman and a talented writer in her own right; she edited a ladies’ magazine for a while, but afterwards pretty much disappeared from society in England.

The story of Heloise and Pierre Abelard is well known and documented through their surviving letters.  This epistolary persona poem imagines Heloise writing from the convent where Abelard asked her to go after their tragic love affair was over.  She became the Abbess there eventually while he became an Abbott elsewhere and they continued to write to each other.  The date of the letter is approximate—I thought of her state of mind soon after she arrived at the convent.

Abelard was Heloise’s tutor and living in her uncle’s house when they became involved.  She became pregnant and they secretly married to pacify the uncle but he didn’t believe they had really married and thought Abelard was going to abandon her so he had Abelard castrated.  Afterwards, Abelard asked Heloise to enter a convent which she did but seemed to regret sometimes.  She seemed to continue to love him while he became more distant and renounced her completely in favor of his career.

On Viewing Dante and Beatrice by Henry Holiday, 1884.

These are a pair of companion ekphrastic ghazals (ekphrastic=inspired by a work of art—could be painting, another poem, or sculpture, etc) from the point of view of the two famous lovers.  It’s true that Dante loved Beatrice Portinari, whom he only met once and saw from afar a few times and didn’t know personally—so the first poem is pretty accurate in terms of their relationship and the few details we know of her brief life.  She was Dante’s muse, and he modeled the famous Beatrice in his poem “Inferno” after her.  This ghazal is a more traditional ghazal, with the repeating rhyme and refrain at the end of the 2nd line of each couplet.  It also makes use of the “signature”—the mention of the name of the person who is presumably writing the poem—in this case, Dante.

The 2nd poem from Beatrice’s point of view is mostly from my imagination because we really have no idea what her feelings for Dante were, or if she even thought of him.  But they did meet the way it describes, as children, at her father’s garden party.  Her father was an important man and never would have let her marry Dante, who was not of their class.  This ghazal is more free-form and doesn’t use the repeating rhyme and refrain, but keeps the repeating word at the end of the first two lines of the first couplet and the 2nd line of each couplet thereafter.

This persona poem is about Irene Adler, a character who appears only in the first of Arthur Conan Doyle’s famous Sherlock Holmes series but who is memorable for being one of the few antagonists that beat Sherlock at his own game and anticipated his every move.  She married a respectable man, Mr. Norton, and moved to another country after their encounter.  She left Sherlock a letter (signed as in the title of the poem) and her portrait which he valued highly.  This poem is written from her point of view and I’ve written another from his "To "the Woman""which has not been published yet.

This is a free ghazal and persona poem written from the point of view of Rachel of the Bible—the story is that after her father lets her and her husband leave, she steals the family household gods (teraphim) but no one knows exactly why—thus the title of the poem!

This is a persona poem about Marie Curie’s reaction to Pierre’s death by accident—he was leaving a meeting in town when he was run over by a horse cart.  He died almost instantly as his head was crushed.  It was raining and people speculate he didn’t see the cart because he was very absent-minded and might not have noticed.   The streets were full of people and traffic because there was also a riot going on.

Jane Austen is reputed to have had a serious love interest at one point in her life but nothing is known for sure, especially the identity of the man, because her sister Cassandra burned all Jane's correspondance from that time, presumably to protect her sister’s privacy.  Jane may not have been jilted—it may have been a mutual agreement, but since she never married, some people think he was the love she missed.  I made up the part about Cassandra foreseeing the break-up, using her namesake, the famous Cassandra from Greek mythology who was cursed with the ability to foresee the future with the caveat that no one would ever believe her!

A fantasy speculative poem that I adapted to depict a real Amazon warrior—(I sort of had a Sandahl Bergman of Conan the Barbarian type in mind when I wrote this!)  When this was published it was accompanied by an excellent illustration—very fierce-looking—I bought the original print from the artist, who is also a poet.

Inspired by the novel Dr. Zhivago, of course, this is a letter Lara would presumably write Yuri from where she lived in Yuriatin, date approximated since it’s fictional.  In the novel, all we see is Yuri’s point of view, never Lara’s, so this is my take on her thoughts.

This title was taken almost word for word from a headline story: “Richard the Lionheart’s Mummified Heart Analyzed” that came out when they found a box with the king’s heart in it, buried in the Cathedral at Rouen, exactly as the poem indicates.  The forensic scientists' results are also exact.  I was then inspired to write a dramatic poem where each character, even the heart, has something to say.  I wanted to portray the contrast between the scientists' examination of the remains of his physical heart, with an examination of the man's feelings—

This was based on an actual event—a woman begging for money on Tamiami trail who I encountered one evening on the way home.  Memories of Seville's Holy Week processions (I was 14 at the time) came up as I tried to portray the look on her face and in her eyes.