I'm on a roll of excellent historical mystery/fantasy reads that shows no signs of ending!  Due in part to my ill health the last week, I finished

The Hanged Man by P.N. Elrod

the first of a series, I'm pleased to note!  This mystery laced with magic takes place in an alternate Victorian England any lover of Sherlock Holmes will enjoy.  In this novel the magic makes perfect sense and posits preferable criminal investigative techniques than our present ones, that's for sure!  Her characters are well-developed and I look forward to reading more about all of them.

A Murder in Time by Julie McElwain

In this novel, a time traveler from the present encounters a serial killer in Regency England.  Fast-moving and led by a very unique female protagonist, this novel satisfies to the very last, (the very last) word!  I liked that the author zigged where the reader would zag.  I heartily approve of zigging!

Mentioned by many as one of the best non-fiction books of 2017,

definitely deserves that distinction.  The story is old, as there have been a few books written about it (and a play, These Shining Lives!) but Moore's approach is fresh.  She focused on the women and their personal lives, which makes the story of their suffering and struggle for justice even more poignant.  The book reads fast and makes a lasting impression.  What strikes me the most is the courage these very young women had in the face of unbelievable setbacks, indifference on the part of both employers and industry, and the hopelessness of their situation.  They really did shine like beacons in the dark history of industrial safety in this country, making it safer for generations to come.

This book led me to

The Woman Who Knew Too Much: Alice Stewart and the Secrets of Radiation,
by Gayle Greene (University of Michigan Press, 1999).

Another incredible story:  a pioneer female doctor who became an epidemiologist who saved countless lives by first discovering the danger of x-raying fetuses before birth, a formerly common practice, and later in her careet, at an age when most people are retired "challenged international nuclear safety standards."  An amazing woman who has not been celebrated enough.

My fiction recommendation is another Jane Austen world spinoff:

Shades of Milk and Honey by Mary Robinette Kowal (2011)

This is the first of a series of regency/fantasy novels by this author, who very skillfully weaves the working of "glamour" as she calls the magical essence into an Austen inspired world.  This particular novel derives inspiration from Austen's Sense and Sensibility but does a nice job of making you forget that fact!  Entertaining, enchanting, and fun.  Even though I enjoyed this novel tremendously, I find I don't feel the need to read the next one, which is strange but maybe a tribute to the satisfying ending of the first!

Happiness is seeing your own book in your library!

Today I walked into the Green Library at Florida International University, where I work, and found that some nice person had displayed my new poetry chapbook, The Ocean Between Us, in good company on the New Books shelf!  They obviously intended that I see it, since I'm the one who usually organizes the display shelves!  A few minutes later it was gone...maybe someone's actually reading it?  Uh, oh! 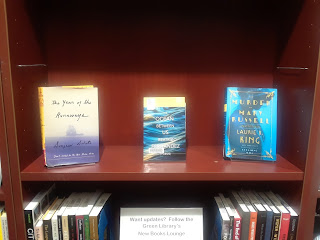 Posted by Nebula at 5:44 PM No comments: