It was the year of the anthology for me, as four anthologies have accepted my poems, three of which will be published in 2017.  Also, it will be a first for my work to be included in an art exhibit!

The Ghazal Page online (3 ghazals, From Dante to Beatrice, From Beatrice to Dante and Rilke Returns to Ronda)

Spark: A Creative Anthology (2 poems not published yet.)

Street Voice journal (3 poems, not published yet, Poem for My Father, In the Shadow of the Miami Metrorail Overpass, Departures)

Queens Center for Latino Studies interview—Meet the Writers—published online on their tumblr page.

Literary Arts Review of Shining from a Different Firmament

Svetlana’s Reads and Reviews blog: review of Shining from a Different Firmament

Words Dance—actually last year, my poem Late Night Shift was a finalist in their nomination list for Best of the Net and I didn’t realize it until recently!

Key West Literary Seminar Writing Workshop with Campbell McGrath  --  this workshop yielded three new poems, two of which have already been published and one, "Calle del Cristo" which was chosen for the aforementioned Arte Latino Now exhibit!

Speculative Fiction writing class (online) with best-selling, award-winning science fiction author C.S. (Celia) Friedman!  This class yielded my first completely edited short story--about a robot!  I also began a story about Death as a character.  It generated many ideas for future stories and I also had several magic world-building ideas that Celia said were original and promising for novel-length works.  I don't intend to write novels, but maybe I could manage a novella or novelette!  I also met a great group of writers who are willing to read and critique my work.

Posted by Nebula at 8:26 AM No comments:

Stonecoast Review publishes my "Monody for a Leading Man" 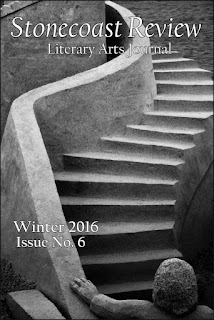 Posted by Nebula at 7:55 AM No comments: