My poem "Reunion" was accepted for publication in this anthology a while back. I just visited their site and I'm happy to find out they found a publisher, Cynren Press! It's available for Pre-order here:
Feminine Rising


We've officially signed a contract with Cynren Press!
Contributors will hear from us as soon as possible about next steps. We are so grateful to you all for sharing your voices with us, for making this labor of love something really worth loving.
Sincerely,
Andrea Fekete and Lara Lillibridge, editors 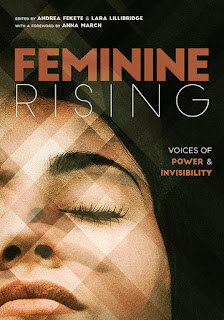 Posted by Nebula at 5:27 PM No comments:

My road to frugality has not led me to what most frugal gurus would call a minimalist lifestyle but it has gotten me to where I wanted to be. I still have more stuff than I know what to do with, or that I could use in many lifetimes, so decluttering our modestly sized home is still a priority. This is why I really think twice before I bring anything into my life that doesn't add to its quality significantly.
That said, this past year a few purchases have greatly added to my quality of life:
Three identical pairs of pants from Kohl's (different colors) at about $30 each. They have elastic waists so if my weight goes up or down a few pounds I don't have to worry. They are dark so they don't show stains and they don't need ironing. This is my uniform system for work: each pant goes with almost every shirt I own so getting dressed for work is simplicity itself! I've divided my closet into work clothes, weekend clothes and in-between clothes (read: "retired" work clothes that will serve in a pinch!)
A medium sized oscillating fan ($30--Lasko brand purchased via Amazon) which immensely helps disperse a/c to specific spots where I need it instead of just turning the a/c to a lower temp. It would be nice to have ceiling fans, but this fan is perched on a bookshelf and does basically the same job much more cheaply! It reaches two "hot spots" in the house where I regularly hang out.
An under the seat carryon suitcase with wheels: $60. (London Fog brand, purchased at Tuesday Morning store) This simplified my traveling greatly--it's much smaller and lighter than the usual carryon so I can lift it with ease if necessary. I have fewer things hanging off my body so it's easier to get around the airport. And it serves as a leg rest when I'm in the waiting area and a bathroom door guard as well--when the stall door doesn't lock properly I prop it up against it to keep it closed.
Speaking of frugality gurus, I'm happy to see that Get Rich Slowly is back in the hands of its originator, J.D. Roth. I'm glad to see this trend away from corporatization of the frugality movement. I hated it when The Simple Dollar's Trent Hamm sold his site, for example. It's never the same once they do. You can see the differerence on the sites for yourself. They both have lots of advertisements but The Simple Dollar is obviously a commercial site now.
Posted by Nebula at 5:18 AM No comments: