Valentine's Day month, is also very appropriately the month several of my ghazals about famous pairs of lovers are appearing:  first, "Maid Marian's Many Silences" was published by Quarterday Review in their Imbolc issue.

This poem, as I mentioned in an earlier post, was inspired by the film "Robin and Marian" starring Sean Connery and Audrey Hepburn as an older Robin Hood and Maid Marian.

Another pair of ekphrastic ghazals, "On Viewing 'Dante and Beatrice' by Henry Holiday, 1884" was republished by The Ghazal Page, in their Issue 58.

These ghazals are companion persona ghazals, written in the voice of Beatrice, then Dante, and inspired by the painting by Henry Holiday: 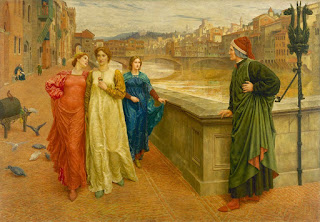