There I was on a perfect spring day, high up on a hill shaded by magnificent oaks draped with Spanish moss, reading gravestones. This cemetery had a nice mixture of recent and historical graves, mostly plain, just the name and dates, but some of them had poignant messages:

Charlie Wade
(no date)
"Gone but not forgot"
"At Rest"

And nearby, a smaller, more recent grave:

That one really brought tears to my eyes, because that one word says it all, doesn't it?
The laconic Wade family knew what really matters in this world and beyond.
Posted by Nebula at 5:43 PM No comments:

Everyone has a favorite childhood book that you never forget despite the intervening years and which, once you see the cover again, brings back ineluctable memories. One of mine was Peggy Bacon's The Ghost of Opalina. I read this book in 3rd or 4th grade, at a time when I would read anything with the word "mystery" "ghost" or "witch" in the title.
(Another favorite from that time: The Witch of Blackbird Pond.) 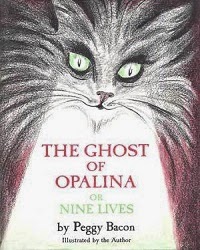 I recently went on a personal quest to find this book at one of the few places it is still available to read: a university library. Turns out the book only had one printing, which was sold exclusively to school libraries, and now it's on sold on the web for anywhere from $80 for a ratty copy to hundreds of dollars for a copy in pristine condition. Many copies have been lost or stolen from libraries, so I was afraid I wouldn't find it at this small Georgia university town library, but there it was! What a thrill it was to see it again!

This particular title was part of a personal collection that had been donated to the library. Most of universities' childrens literature collections are donated, lovingly collected by private visionaries (sometimes school teachers or librarians) who saw the value of children's books when no one else did and went to the trouble of preserving what were considered throwaways.

It was just as funny and entertaining as I remember! Which just goes to show that the truly great stories of childhood should just as enjoyably be read by adults.

I don't believe in age-demarcations for reading--some books may be better encountered at a certain time in your life but most good books are timeless and ageless. My parents never censored my reading and once I began to read I read everything within my reach. This omnivorous reading habit has continued, though I must say there have been some exceptions. I've never liked the Harry Potter novels, for example. But then again, I never was a big fantasy-lover, with a few remarkable standouts like Ghost of Opalina! I fell in love with science fiction at around age 10 and that took the place of old fantasy favorites such as the novels of Madeleine L'Engle (The Young Unicorns, A Wrinkle in Time series), Eleanor Cameron (The Court of Stone Children) and Philippa Pearce (Tom's Midnight Garden.)

UPDATE 2014:
The Ghost of Opalina
IS NOW AVAILABLE AS A FREE PDF!!