Thirty West Publishing House just nominated my sonnet "Blood Pacts" as one of their Pushcart Prize nominations for 2017!  I am floored and very honored!  I never imagined it would happen again so soon.  Many thanks to editor Josh Dale and others who took the time and effort to make it happen!
Congratulations to my fellow nominees, too! 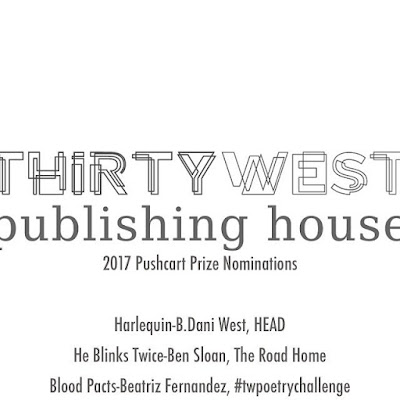 Posted by Nebula at 6:25 PM No comments:

This blog has become less and less about books and frugality and more about my writing and publications, so I thought I'd break the pace and recommend some books.

Over my blessedly quiet Thanksgiving holidays, I've completed two very different books that nonetheless have been very satisfying reads and somehow seem to complement each other well. I think a Jane Austen reader would heartily approve of this first book:

Mrs Pettigrew Lives for a Day by Winifred Watson, was first published in 1938 and has been reintroduced by Persephone Classics books.  My copy has a 10 lb price on and it's worth every penny (pence?)--it's 10 lbs of utter satisfaction.  Mrs. Watson, who like Jane Austen (foreshadowing next book review here) published six books upon which her fame was made, but who unlike Ms. Austen, lived a long and healthy life afterwards, was interviewed by the person who rediscovered her book and urged it upon the publishers.  Since then, a film starring Frances McDormand, which is also stupendous, has been made.

Mrs. Pettigrew has been described as a frothy confection of a novel with a Cinderella theme, but I think the reason it is so touching and enjoyable is because the author herself experienced a version of the Cinderella dream she confers so entertainingly on her book's eponymous heroine.  Watson herself was an "overnight" success with her first novel and was widely feted and celebrated, so she knew first-hand how it felt.  What distinguishes the novel from other fun reads is the author's deep sense of compassion for the frantic desperation behind all the bubbly adventures and witty repartee.  Watson's insight into the human heart makes her novel timeless.

And, speaking of time, the other book I devoured over the break is a brand new one (though also about the past):

The Jane Austen Project by Kathleen A. Flynn (who, by the way, had the same idea as I had had a while back for a story but she made it into a novel!  In my story, it was the Great Lives Project)   In this time travel novel, two researchers go back to Jane Austen's time ostensibly to retrieve the lost full manuscript of The Watsons (ha! another link to Mrs. Pettigrew book) and the letters Cassandra destroyed but also end up doing something else (no spoilers!) that of course, alters everything in unpredictable ways.

My only objection to this novel is that I was led to believe by the blurb writers that it had a surprise ending, which it didn't. Not unless you count the present being changed by the time travelers' actions in the past as surprising, which it shouldn't be to anyone who has ever read a time travel novel!  Also, the author keeps dropping what I thought were really obvious hints about certain things which never came to pass--ok, so maybe that was me reading things into things but still, I think it would have made for an interesting twist if what I thought was going to happen had happened.  Oh, and I thought the main character acted quite against character in the end, which threw me a bit.

But all these comments don't detract in any way from it being a most wonderful read.  I don't even bother thinking up all these objections to novels that don't have meat to them.  I love when novels give you food for thought and raise all these questions in your mind.  Few novels are even worthy of a second thought and this one will certainly provide lots of discussion fodder for an Austenite book club!

Posted by Nebula at 2:22 PM No comments:

The Ocean Between Us cover reveal!

Backbone Press just published my new poetry chapbook The Ocean Between Us along with Faisal Mohyuddin‘s The Riddle of Longing.  Faisal’s book The Displaced Children of Displaced Children just won the 2017 Sexton Prize for Poetry from Eyewear Publishing; I’m very honored and excited to be published alongside him!

Many thanks to editor Crystal Simone Smith for the beautiful cover design and to editor Daniel Romo for his blurb! 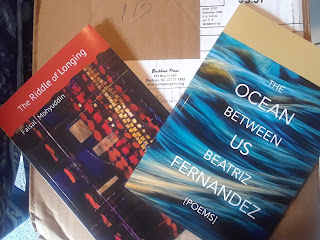 Posted by Nebula at 4:55 AM No comments: